Just when you think you’ve seen or heard the most bizarre stories, along came a topper! A man who recently passed away (the cause of death is unknown at this time) was buried inside his wheels. This, according to folks, was what he would have wanted. 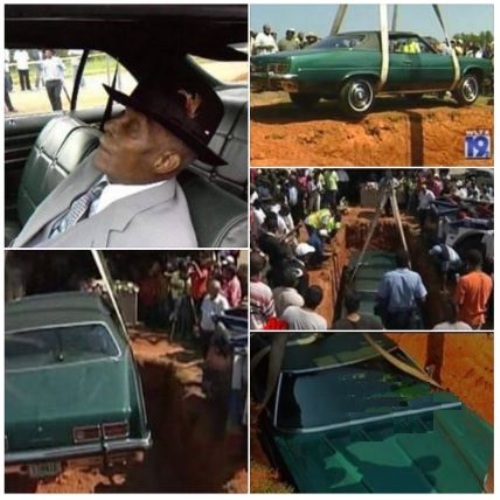 According to the  footage, which is displayed below, is said to show the burial of the car owner by the name of Lonnie, who really loved his wheels. The car was used in place of a coffin and a crane lifted it to move it to the right spot for burial.

The man was reportedly fond of his vehicle. Everyone in the neighborhood knew just how much he loved his wheels. Other residents in the neighborhood came out strongly slamming the elderly man saying that it was selfish of him to request to be buried in the car, saying he had children and grandchildren and they could have really put that car to good use.

His nephew also added that the old man was just bitter and never liked sharing, he is sure if it was possible he would have requested to be buried with his house.

Here is the video below……