A Harare man recently stirred controversy after finding homeage in a ditch which he transformed into a bath tub. The man that many believe to be homeless stripped his clothes off and began bathing in a ditch which the Harare City Council has taken time to fill up.

An illustration of the worrying state of affairs is the Harare man who takes a bath in an uncovered ditch much to the amusement of the general public. Whether it was a genuine desire to take a bath or merely an act aimed at raising some attention to the authorities remains a mystery to many.

The ditch which is captured with a man bathing has been there for months with pedestrians at risk of being injured eapecially at night. Motorists are also at risk of finding themselves in a ditch which Council has failed to cover thus putting pedestrians and motorists at risk.

Maintenance of roads has over the years emerged as a major cause for concern with many of the roads requiring pothole patching. While major roads received attention following Emmerson Mnangwa’s rise to power, authorities remain grappled with roads that need attention especially in areas surrounding the central business district.

High density surburbs require a lot of attention so do parts of low density areas. The amusing episode of the man who chose to bath in a ditch serves to illustrate the great work that needs to be done to ensure Harare’s roads are safe. 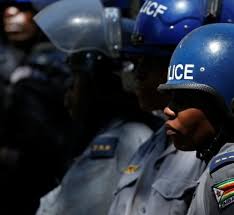