First Lady Grace Mugabe came up with the most unbelievable proposition, suggesting that President Robert Mugabe should lead Zimbabwe till his death yesterday at Zanu PF million-man march. Grace quoted from the Bible, saying God had set Mugabe apart, as a ”prophet to the nations”. 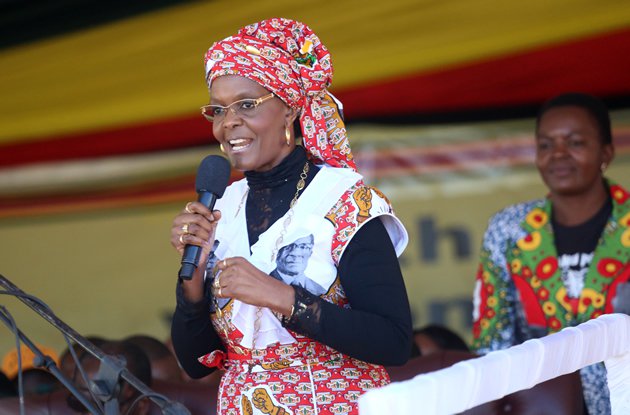 1. ”President Mugabe is an unparalleled leader and because you have stuck to principle even in the face of sanctions, your people now believe you. We want you to remain our leader, We want you to lead this country from your grave, while you lie at the National Heroes’ Acre,” Grace Mugabe

2. ”The West want me to retire and the MDC-T as well, but we ask if this is goodwill, do they really want me to go and rest or they are scared? Go and tell them I am not going anywhere.” President Mugabe.

3. ”Come with your criticism, with your grievances into the party and let us openly discuss them. Even war veterans, they must not be seen to push a different political agenda from outside the structures of the party. We do not want that nonsense.”

4. ”After the death of (former Zanu national chairman, Herbert) Chitepo and (Ndabaningi) Sithole was vacillating, I was asked to lead the party in Mozambique, but again I insisted that the people must choose their leaders. Until the Chimoio congress in 1977, we asked the likes of (Vice-President Emmerson) Mnangagwa and (Defence minister Sydney) Sekeramayi to join us and we gave them positions.” President Mugabe

5. ”We did not campaign for any position or go to traditional healers like some people do now.”President Robert.

6.”Ko ndogoenda kupi? I belong to my people. My people say ‘stay here’. I am not a Briton i don’t like it. I am not American, I am not Yankee. I told Blair to keep his England so that I will Keep my Zimbabwe, Ko Zvino” President Mugabe.

7. ”When we joined the party, we never asked for positions. We had to make do with what was assigned to us from the National Democratic Party, where I served as publicity secretary, Zapu the same, before Zanu was formed and I was appointed secretary-general” President Mugabe.

8. ”Do they really want me to go and rest or they are scared? Go and tell them I am not going anywhere. If the people say go, I will, but as long as I still feel strong enough and able to deliver, I will be here.” President Mugabe.

9. ”The groups that we hear are in the party, these are treasonous. That is a culture that is alien to Zanu PF and we have no idea where it is coming from” President Mugabe.